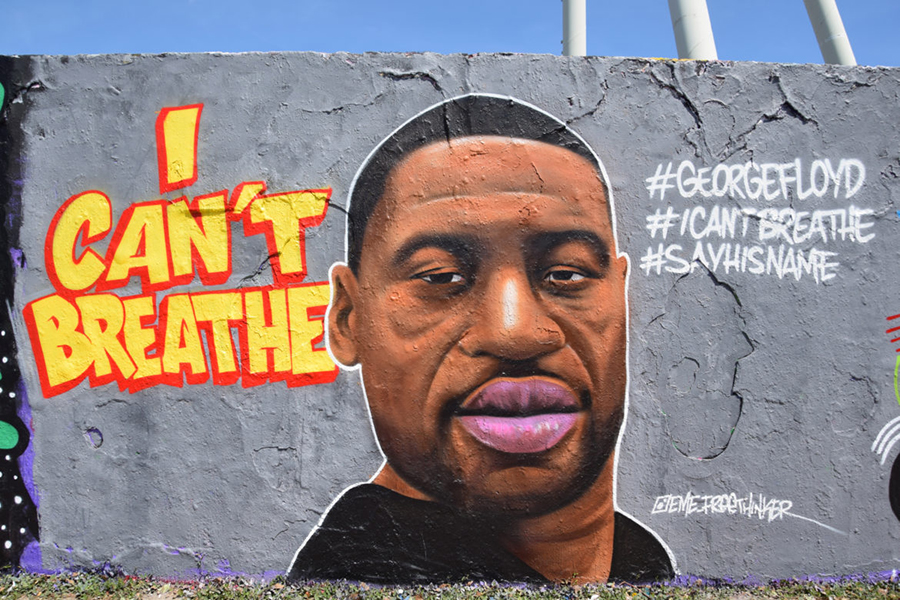 Throughout the course of our own personal history, we all have wrestled with why. Why me? Why now? Why my son, daughter, mother, or father? Your life perspective is one that alters the lens in which you wrestle with these questions. If you have been overcome with multiple hardships, your lens may be one that is dirty and hard to see through. You may struggle with seeing anything other than the negative of your situation. And without the support of a solid partner, family or friend, it can be difficult remaining positive. But if you naturally go through life feeling as though things happen for a reason, your lens may be giving you perfect 20/20 vision and you understand there is some lesson to learn from this hardship.

At some point last year, we all looked at our 2020 Bingo Card with shenanigans that we never in a million years could have predicted, and asked ourselves Why? There are so many to dive into, but for today, I want to briefly touch on Why the death of George Floyd caused outrage that spread like wildfire.

The brutal death that was captured on camera the summer 2020, while disturbing on its own, is certainly not the first, nor the last of its kind. Going so far back to 2012 when Trayvon Martin was shot to death, #BlackLivesMatter has been around. Just in the past eight years, there are numerous names such as, Michael Brown, Eric Garner, Tamir Rice, Sandra Bland, Freddie Gray, Philando Castile and Alton Sterling that have all made national headlines. Yet none of these names seemed to stir the same type of emotions that Ahmaud Arbery, Breonna Taylor, and George Floyd brought to the forefront. So, it brings me to the question of Why? What made these circumstances and situations any different? Why did protests erupt like wildfire? Why were my white friends and family members so quick now to want to know how to make change?

Two major factors go into my why, the pandemic, and movement. Let’s dive into the pandemic.

The entire world was on lock down. As people all across the globe were forced to stay home, we all unequivocally were spending more time than ever watching the news, on social media, and trying to stay connected in any way we could to the outside world. There are approximately 328 million people that reside in the United States. According to the Bureau of Labor Statistics, in June 47.2% of Americans were without a job. Stanford economist Nicholas Bloom in an interview dated June 29, 2020, indicated that of those Americans who were employed, nearly 42% were working from home, essentially the majority of us were home. There were no distractions, we all had massive amounts of extra time on our hands to really let these deaths soak into our lives. We didn’t just watch a snippet on the news and return to our normal programming of busy lives, vacations, travel sports league, happy hour mixer, and backyard barbeques. It shook us to our core. We were forced to wrestle with this country’s deep dark history and decide what side of this movement we wanted to be on.

Our country’s history is filled with lots of movements, going so far back to the American Revolution. Black Freedom, Women’s Rights, and Labor Movements were all easily covered in our US History textbooks. More recently #MeToo and #BlackLivesMatter are the movements of our generation. In 2015, the New Yorker first broke their story of a 22-year-old female who accused Harvey Weinstein of inappropriate behavior. This story as a stand-alone, was sad, heartbreaking, and much like the many names of the BLM movement, was easily forgotten about. Very similarly to BLM, while the behavior in question was sickening, cruel, and needed to stop. No one felt empowered enough as one single, solitary voice to rise above the rest. As people choose to speak out and relate their personal experiences to those in the movement, it becomes more difficult to continue turning a blind eye when you realize that someone you know has been impacted.

The force of a movement reminds me of a powerful quote by Ryunosuke Akutagawa, “Individually we are one drop. Together we are an ocean.” Both #MeToo and #BlackLivesMatter are movements over bad behavior that have gone ignored for far too long. We can no longer turn a blind eye to social injustice when we are forced into hearing and seeing the impact it has in our community.

I ask you, when the history books are written, and you reflect upon this year with your children, what side of the movement do you want to be on?