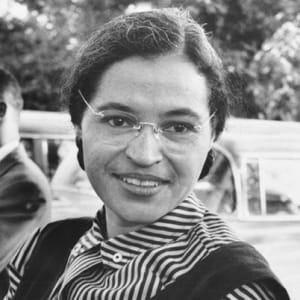 We are all familiar with the name Rosa Parks, and her impact on the Civils Rights movement. We know from our history books, that it was her courage that started the bus boycott that lasted 341 days before the Supreme Court ruled bus segregation unconstitutional. Yet there is so much more to her story and history that is often overlooked. Did you know that when Rosa refused to give up her seat in 1955, it was not her first run in with James Blake, the bus driver who called the cops? Or that the section she was sitting in was not a “whites only” section of the bus?

Rosa was born in Alabama in February of 1913. Rosa’s mother was a teacher, so there was a strong value on education within the home. Rosa had initially dropped out of high school at the age of 16 to care for her ailing grandmother. Shortly after her passing, Rosa’s mother became chronically ill and also required regular caretaking. Rosa became Mrs. Rosa Parks, in 1932 at the age of 19, marrying Raymond Parks who had 10 years on her. At this point, Rosa returned to high school to obtain her diploma. Rosa’s achievement of her high school diploma was a tremendous feat on its own. At this time in history, only 7% of blacks finished high school.

Mr. Parks was a long-time member of the National Association for the Advancement of Colored People. Through the influence of both her family as well as her husband, Rosa joined the NAACP herself in 1943 where she worked specifically on criminal justice. Rosa’s work within the NAACP served two functions, one was protecting black men from false accusations and lynchings, the other assisting sexual assault victims to help them ensure they had their day in court. Rosa’s role as a sexual assault investigator was a position she valued and something she did with passion every day. The year before she married, a white male neighbor had attempted to assault her. As a result of this trauma, she made sure that other sexual assault survivors would be able to not only find their voice, but also justice.

While Raymond’s influence was a catalyst to Rosa’s membership in the NAACP, he did not support her decision or choice to join. He felt it was too dangerous for his wife to be outspoken, especially as it pertained to such serious charges like sexual assault. Rosa did not let anyone, especially a man persuade her to step back. Instead, it only fueled her to become more active. She went on to become her chapter secretary and worked closely with their chapter president.

Rosa is most famously known for her refusal to give up her bus seat in December of 1955. However, this was not the first interaction that Mrs. Parks had with the driver James Blake. Approximately 12 years prior, Rosa had paid for her fare at the front of the bus but refused to abide by the rule which required her to exit, and re-enter from the back of the bus. Parks stood her ground until Blake physically pushed her, in which Parks decided not to ride the bus rather than continue to deal with him. In her autobiography Parks commented, “I never wanted to be on that man’s bus again. After that, I made a point of looking at who was driving the bus before I got on. I didn’t want any more run-ins with the mean one.”

When Rosa commented on the incident from 1955 and why she entered a bus driven by Blake she wrote, “I was so preoccupied that day that I failed to notice that Blake was driving that bus. If I had been paying attention, I wouldn’t even have gotten on that bus.” What makes Rosa’s story unique comes down to some unwritten rules of law regarding segregation. At the time, the law was written that the front of the bus was reserved for white citizens, the seats behind them were for black citizens. However, it was customary that if all the white seats were full, and more room was needed, the driver would convert the first row of the colored section into another white row. This is exactly what happened when Rosa was asked to give up her seat. While rumors had circulated that Rosa was tired from a long day of work, her own words indicate otherwise, “I was not tired physically. No, the only tired I was, was tired of giving in.”

Rosa was arrested by two police officers who agreed with Blake that she had violated the law of segregation. This single event was a catalyst to the larger idea of challenging the law of segregation. E.D. Nixon, who was the local chapter president of the NAACP had been on the search for a courageous and honest black person, who was full of so much integrity, that the courts would have no other choice but to vote in their favor. Nixon felt that Parks and her arrest were just the case to take on to prove that segregation was unconstitutional. At the same time, the wheels of the bus boycott were in motion. Over 35,000 flyers were sent home with children, informing parents of the planned boycott.

Participation in the boycott was much larger than either Parks or Nixon had initially dreamed. It became so large, they formed the Montgomery Improvement Association (MIA) to manage the boycott. They elected Dr. Martin Luther King Jr., who was only 26 at the time, to be MIA president.

The boycott continued until November of 1956, nearly a year after Parks’ arrest. After many legal battles, appeals, and other related lawsuits, the Supreme Court had finally ruled that bus segregation was deemed unconstitutional. The bus boycott ended one day after the court’s ruling.

Unfortunately, in the year that had transpired since Parks’ arrest, she faced incredible amounts of harassment and threats. As a result, she moved to Detroit to live near family. Neither threats, nor a relocation deterred Parks from continuing to serve her community. Parks took on a new job working for the Detroit office of Congressman John Conyers Jr. in 1965 and worked there until she retired in 1988.

Even in her golden years, she still had passion and drive to be involved in the lives of those who needed her most. A year before her retirement she and her husband founded the Rosa and Raymond Parks Institute for Self-Development, which was meant to serve the youth of Detroit. As an icon to the civil rights moments, she continued to travel to support other events on social justice issues and later went on to write her autobiography. Rosa was awarded the Congressional Gold Medal in 1999, which is the highest honor the United States awards to civilians. Even in death Rosa continued to pave new paths. She died at the age of 92, in October of 2005, and became the first woman in the nation’s history to lie in honor at the U.S. Capitol.